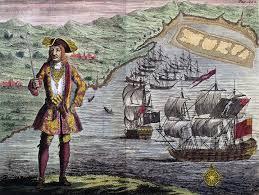 Bartholomew Roberts was born John Roberts. John made little impact on his village home  in Pembrokeshire in the eleven years he spent growing up there during the late sixteen hundreds. However, when the boy left to work on a royal naval ship, he soon escalated to remarkable fame.

Held in utmost regard by all that cruised the dark side of the seven seas, John Robert’s legacy grew to be more extraordinary than anyone in his small home county of Pembrokeshire could have dared imagine.

It all began when one day His Majesty’s royal ship, on which young John was aboard, was struck by fearsome pirates out at sea. The captain among them was none other than a Howell Davies of Milford Haven, a notorious sailor among thieves who had once lived not more than twenty miles from John Robert’s own home.

Although not eager to join the pirates like some of his Royal Naval shipmates, John was quick to take advantage of an opportunity.

As a Welsh speaker, rather than be enslaved or killed, he made himself useful and trustworthy to Captain Howell. In no time John was right-hand man to the ship’s leader and the two formed a genuine bond. John’s navigational skills proved to be exceptional and he sailed with Howell as a pirate for some years. Later on, at the time of Captain Howell’s passing, John Robert’s never-ending legacy begins.

Immediately voted in as the new captain by the crew, John Roberts evolves. He is to be known as Barti Ddu in Welsh (pronounced ‘thee’), or Black Bart in English.

The once quiet boy from Wales, of only marginal means, is now the most powerful man on the water.

Respected, sharp and eloquent, Barti Ddu is set to become arguably the greatest pirate who ever lived.

His persona was clever, and strangely kind given the dark industry he thrived in, capturing over four hundred ships during the course of his reign. Creator of the first pirate flag, “A merry life but a short one” was his carefree moto and outlook on life.

The men valued Barti in the highest esteem, he invented the pirate code where by every man on board should have equal share of all bounty and women were protected from pillaging and attack.

A creative too was he, for every pirate you see wearing elaborate robes and ruffled fabrics in today’s modern adaptation of a pirate is based on him. Black Bart was never without ornate dress and neither would he dream of going into battle without the accompanying sound of violins and strings playing to bring passionate ferocity to the fight.